Chris Walsh started his culinary career at his mother’s side at a very early age, his actual first cookbook circa 1972 was a “Peanuts Cookbook” ala Charlie Brown and company where he became fascinated with the science of cooking i.e.; making mayonnaise from scratch and continued his exploration of the worlds cuisines thru the Time Life series of cookbooks thru the mid to late 70’s.

His first professional job was at a northern Italian restaurant while still attending high school. His passion for learning new cuisines is what ultimately lead him to his first executive chef job at California Cuisine in 1985. Now with nearly 30 years experience he has returned to his root as California Cuisine Caterings executive chef and continues to explore new cuisine’s and style’s of cooking including a vast amount of research about the cuisine’s of Africa, South America and most recently delving into Vegan cuisine. Chef Walsh is excited to rejoin his family at California Cuisine Catering and looks forward to creating events to remember. 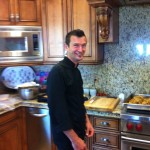 Dominic began his career working for California Cuisine, starting a busboy, eager to work his way up to fine dining waiter, he also began working with the catering department, again, learning from the ground up. Over the years, Dominic has learned the catering business inside and out, managing small dinner parties to overseeing large events, weddings,  corporate events and everything in between. Now, the Director of Catering, Dominic is fond of putting together events form start to finish, very hands on, don’t be surprised if you see him washing the dishes!

“Food is a part of our lives from start to finish, I love being a part of that”.  DD